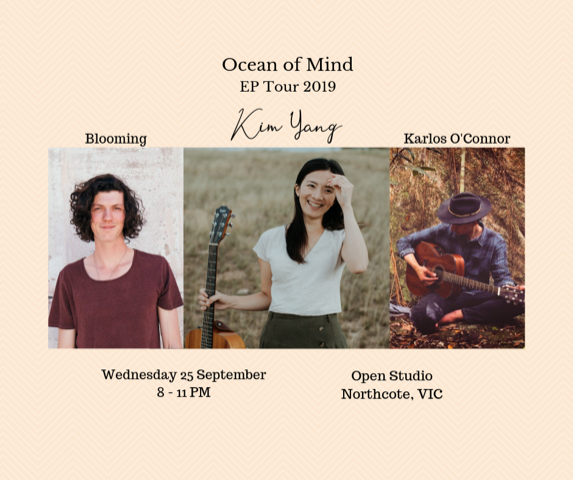 Taiwanese-Australian folk singer-songwriter Kim Yang is leaving her hometown of Canberra, gathering her two favorite Melbourne artists Karlos O’Connor and Blooming, and inviting you to a heartfelt concert to celebrate the release of Yang’s debut EP.

Kim Yang Music
Inspired by female vocalists like Kina Grannis, First Aid Kit, and Eva Cassidy, Kim’s soothing instrumental fingerpicking meets ethereal vocals that is spellbinding. Her songs speak from her experiences as a partner, a daughter, a traveler and an insecure soulmate, stories balancing delicately between vulnerability and power. Since developing a passion for music at an early age, Kim has shared her voice everywhere from intimate bookshops to national television. Driven by a desire to share her stories with the world, Kim picked up her ukulele and started writing songs. She stepped out of her bedroom and into the streets, markets and cafes of Canberra. Since then she has collaborated with renowned local artists and played at major venues in Canberra, around Australia and overseas. Most recently, Kim played her first festival gig at the 2019 National Folk Festival and released her debut EP Ocean of Mind in May 2019. ‘Holy crap your voice is AMAZING – spellbinding even. You had me from the first melody and kept me enthralled all the way through to the end.’ – Nkechi Anele (Triple J)

‘Kim Yang is an outstanding singer/songwriter who bridges cultures with songs about her experiences in both Taiwan and Australia. Kim made her first appearance at the National Folk Festival in 2019 exciting and engaging audiences with her fresh and honest style. I’m sure this will be the first of many.’ – Pam Merrigan (Artistic Director, National Folk Festival)

Blooming
Dissolving the barriers between audience and artist, Blooming is a project centered around growth and renewal through music, storytelling, poetry and live performance art.

“It’s hard not to listen to (him) without feeling transported, (his) blend of alt folk with rich lyrics is quite simply bliss to the ears.” -Coconut Kids

Melbourne based Folk singer-songwriter Karlos O’Connor writes lyrics with the poetic influence of Bright Eyes, borrows Jeff Buckley’s breathy-vibrato tones and holds some of the emotional weight of Keaton Henson. Karlos O’Connor is lead vocalist in the folk-rap group Dull Lucida, laying down mellow vibes, flute solos and heavy beats. His debut Album “Collywobbles” means “Butterflies in stomach” and illustrates life’s anxieties, both good & bad in a bitter-sweet manner, and his latest single “Hazy” describes losing a loved one.